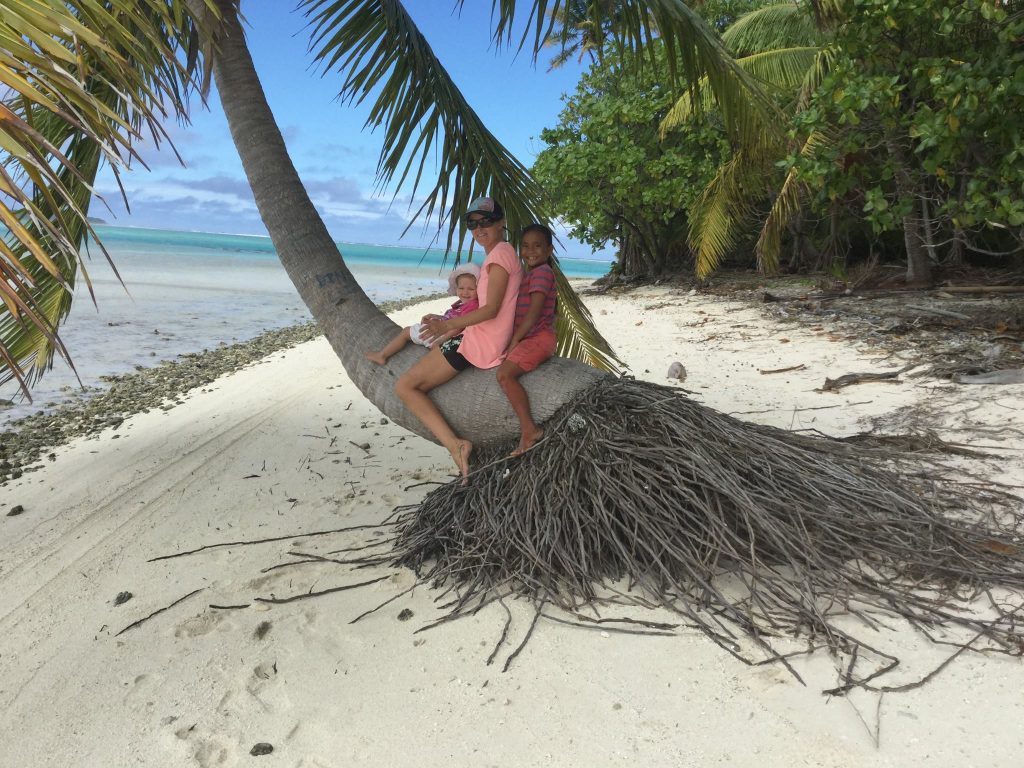 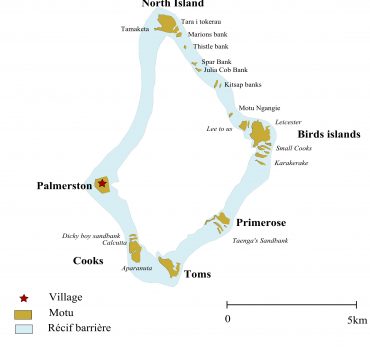 We have arrived in Palmerston! We haven’t been allowed to bring the boat into the lagoon as they don’t want boats inside anymore, they say they have been polluting the lagoon, so we are outside the reef tied onto one of their buoys.

It’s a funny system here. We had to radio in to tell the islanders that we had arrived, tie up on a buoy outside the reef and to wait for someone to come out to see us. Apparently it’s a bit of a race, the first boat to us will be the family that will then host us on the island for the rest of our stay.

We had no idea how long the wait was going to be, and were quite honestly dying to get to land as it had been a bit of a bumpy passage. Juju had been sick the first day, and I had been feeling a bit green too.

We called out to a little dingy boat that came alongside, and we asked if it would be possible to come in through the pass. We were told in a not too friendly manner, no. We had to wait for our host family to come and pick us up (this guy was hosting the boat next door). We were not to come ashore in our own dingy.   You have to respect their rules, it’s their island after all! Queen Victoria did give it to their family….it’s quite unique. Although they are administered by the Cook Islands, they have their own council and their own system of governing. They are practically self-sufficient. 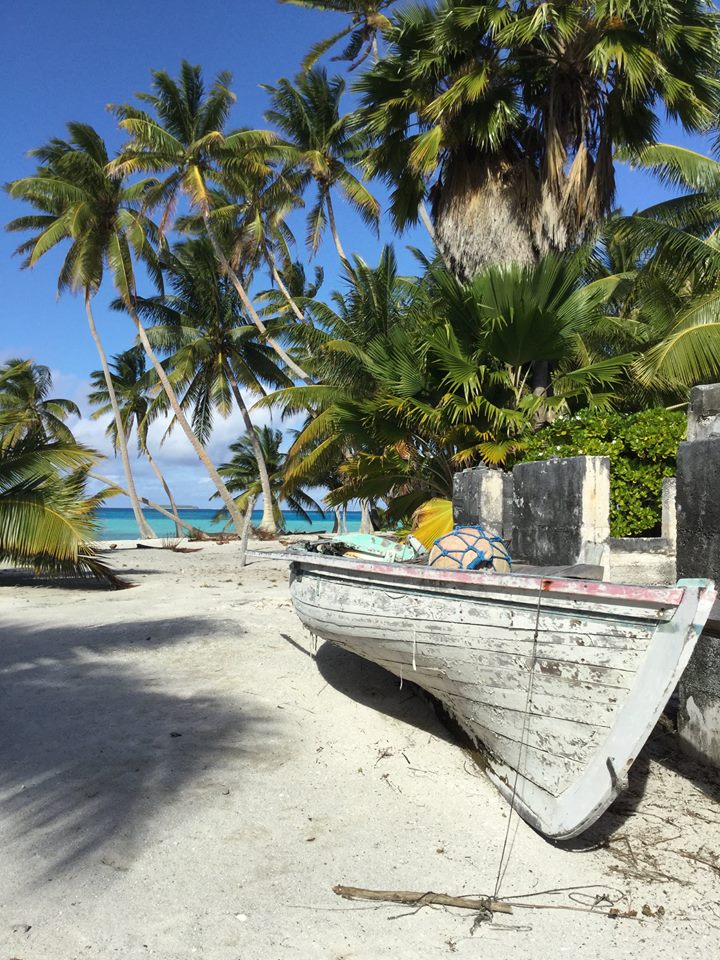 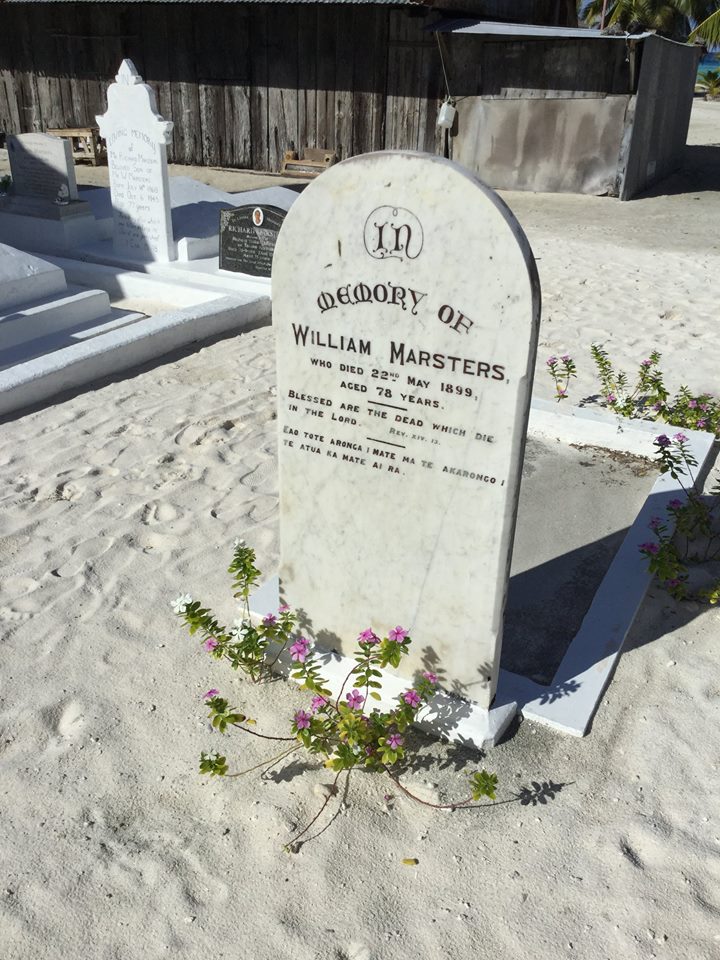 Bob and his daughter, did eventually come and get us, and then we had to rush to get ourselves together and embark into their little motor boat whilst the waves continued bobbing us all about.

The pass is quite small and we sped in, Bob knowing each coral head and surfing the waves.  It was so nice to arrive in the calm waters of the lagoon. With lots of coral heads and a deep turquoise blue, it looked a lovely spot for snorkelling.

Bobs’ house was just up from the beach and they kindly offered us use of the shower and washing machine (much appreciated after a bit of a vomitty voyage), but we have to rush a bit as they are having a family reunion.

We didn’t realise at the time, but we had arrived on a special day. There was a group of 40 Australians and New Zealanders on the Island, all of whom were relations and part of the Marsters’ Family. A special religious service was to take place with the laying of a tomb stone for a recently departed Marsters.

After the service we were invited to join them in a feast of local dishes. They insisted that we “Yachties” helped ourselves first. We felt a little awkward turning up at the last minute, not helping and then digging in first. They were very kind and it was delicious. There was more than enough for everyone.  Bob’s family generously offered us food each time we arrive on the island.

Custom has it that we as guests are to eat first, and we tuck in whilst they chat away to us. It feels a bit odd but Bob insists that this is what they do and they don’t expect anything in exchange.

He was proud to explain how they function with no money and no cars on the island. There can’t be many Westernized Islands in the world where they have decided to do away with the idea of using money. 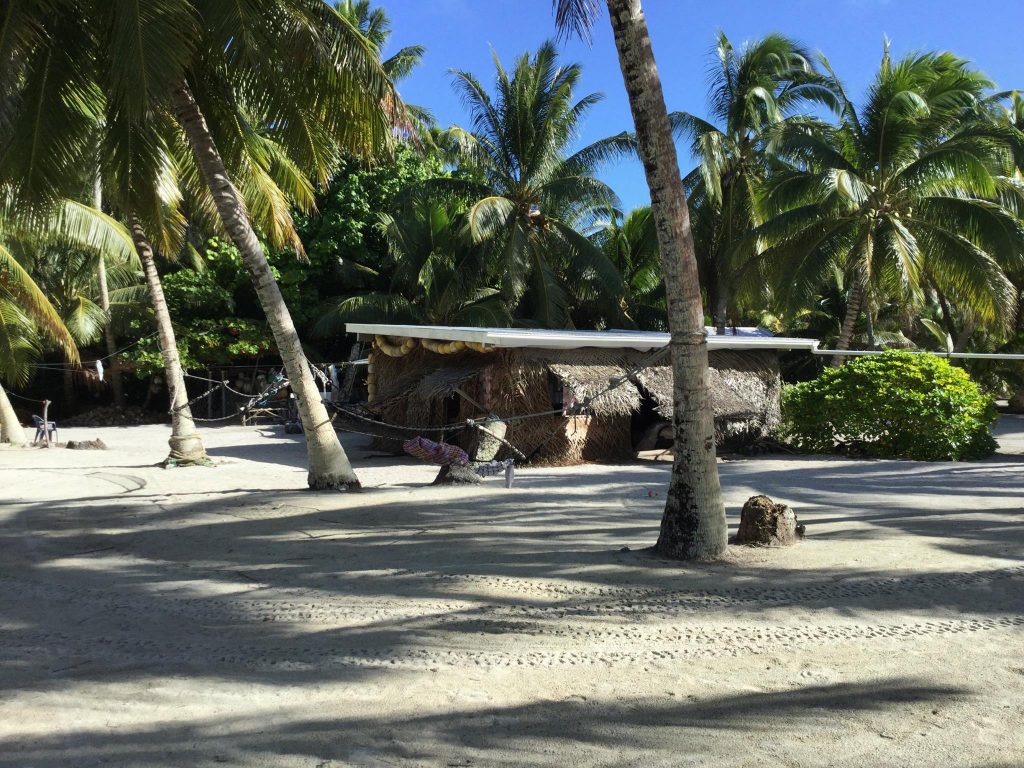 Bob gave us and another crew of “Yachties” a tour of the island explaining to us a little of the history. As As he explained, William Marsters, was a carpenter and barrel maker and came to the island in 1863. He brought with him three wives and had 23 children! He organized his family by splitting the island into three equal strips, one for each wife and their children.

This is still how the island is still spit today, with the descendants still living on and maintaining their parts of the island. The islands council is the three heads of the families, plus three other family members and the mayor is Bob.

The main street is a wide sand road with a scattering of houses. Some made of concrete, others wooden with tin roofs. The old house of the first Marsters family is made in the wood of a ship wreck and still standing. There’s a little church, whose bell is also from an old ship wreck, and a cemetery. No shops, they just have to make-do until the supply ship comes to them just a few times a year.

Bob said that they help each other out, if you run out of something your neighbour will help you and vice versa. However, you don’t help yourself, nobody takes a coconut if it’s not on his land. There are very strict territorial rules and they still follow the same well organized system for communal living that the original Bob Marsters laid down.

They have a small solar power electric plant and most of the houses have electricity. They use rain water storage tanks, and have two new big tanks, they say they usually have enough fresh water to last for 6 months and they filter this for drinking water.

There is a newly constructed telephone station and the mobile telephone works here too.  There are three people who are allowed to live on the island who are not family members. Two of them are teachers at the school, and the third is a nurse.

The islanders receive a budget from the Cook islands but are then free to spend it as they please, or as they need.   Although they don’t use money on the island, they do sell parrot fish to Raratonga, apparently for a very good price. There is also a trade with copra.

There can be long waits between supply ships, and if the weather is bad they don’t come at all. This means that they are usually happy to see cruising yachts, if for nothing else than some fresh conversation. However, they do now have the occasional cruise ships coming to visit with 300 people arriving on the island at once…lucky we didn’t come that day!! 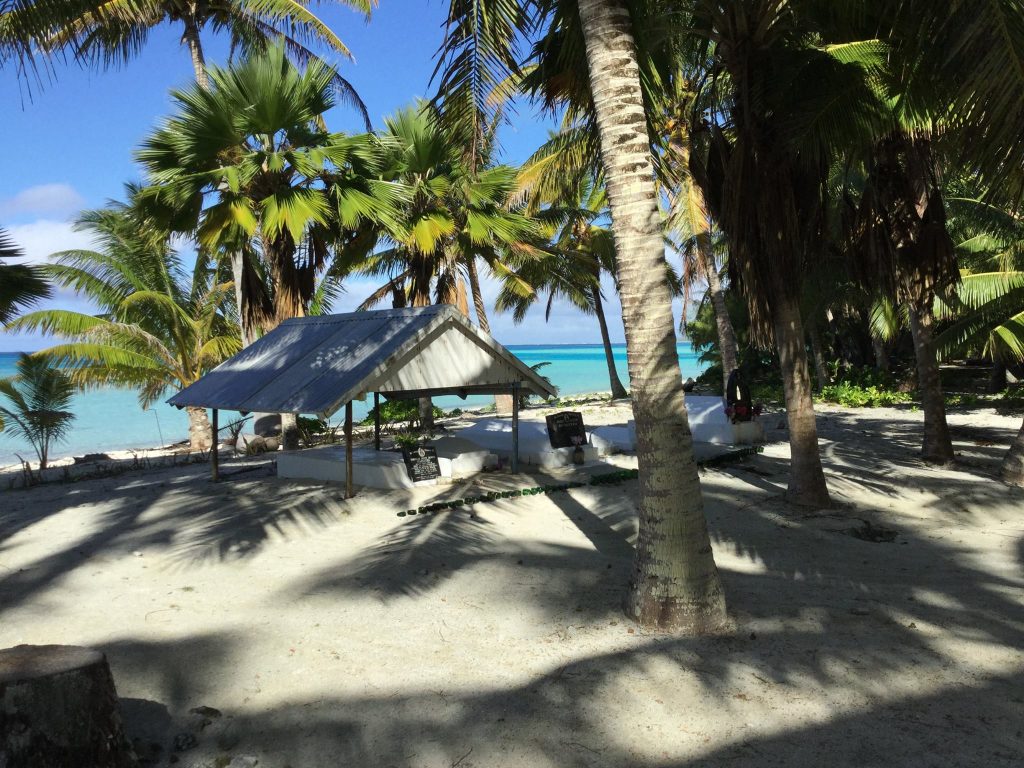 It’s a beautiful place to visit, and the people are very kind. Juju was so happy playing with the other little children, and had her first ride on a little pink bike. We had a siesta on huge fishing net hammocks and watched the waves bobbing the boats about on the other side of the reef.

We roamed about the island on little paths between the coconut trees, visited the ship wrecked boat washed up on the sand, collected pretty little shells and watched the locals fishing for Parrot fish. It was relaxing, beautiful, paradisiac but somehow it didn’t feel very lost…and I guess we were a little bit disappointed as it wasn’t quite what we were expecting.

For Guillaume, Palmerston was the remote pacific paradise that he had been dreaming about long before we left to live in French Polynesia. He had read articles about a French family who had sailed there and lived on their boat in the lagoon for months and we had imagined bringing our boat in the lagoon too.

‘Arc en Ciel’ sits low on the water, so each time there’s a wave, it bangs just under our cabin and everything creaks and groans in these conditions, it’s as if she’s saying she wants to be back into the lagoon too.

We had hoped to kite surf in the lagoon and spend a good few weeks getting to know the locals.  The system of being brought back and forth on Bob’s boat made us feel a little less free than if we could have used our own dingy to come ashore.

For example Guillaume had just started playing volleyball with some kids, and we were all having a good time, but were then told it was time to go back before the end of the game. It was a bit of a shame. 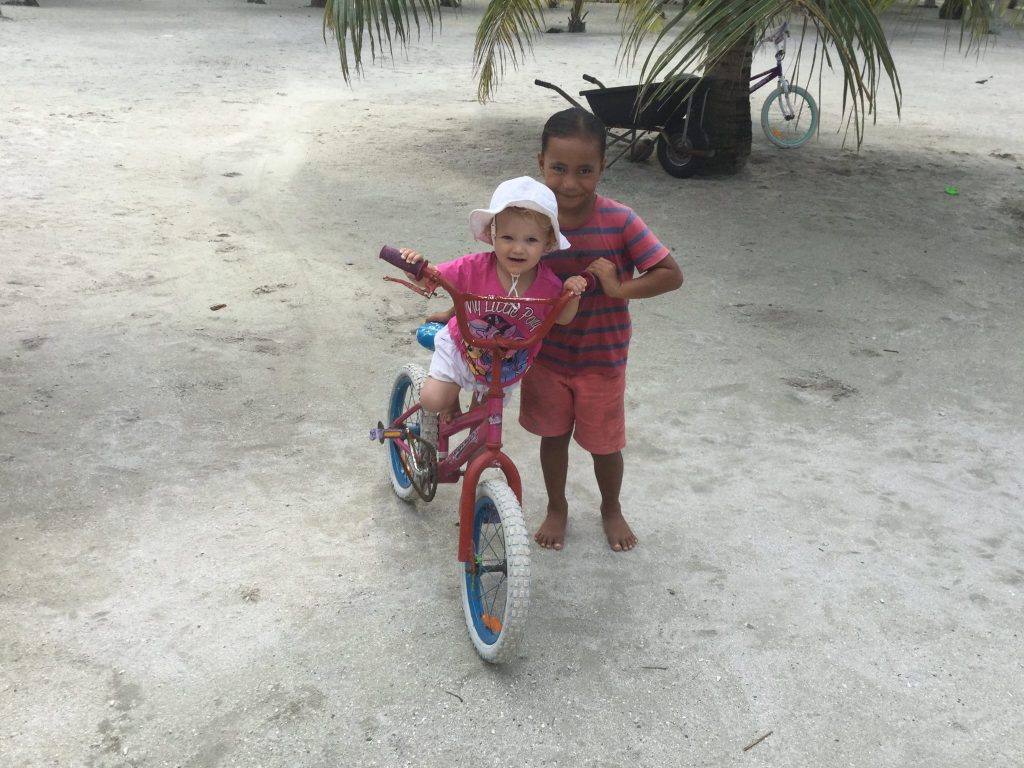 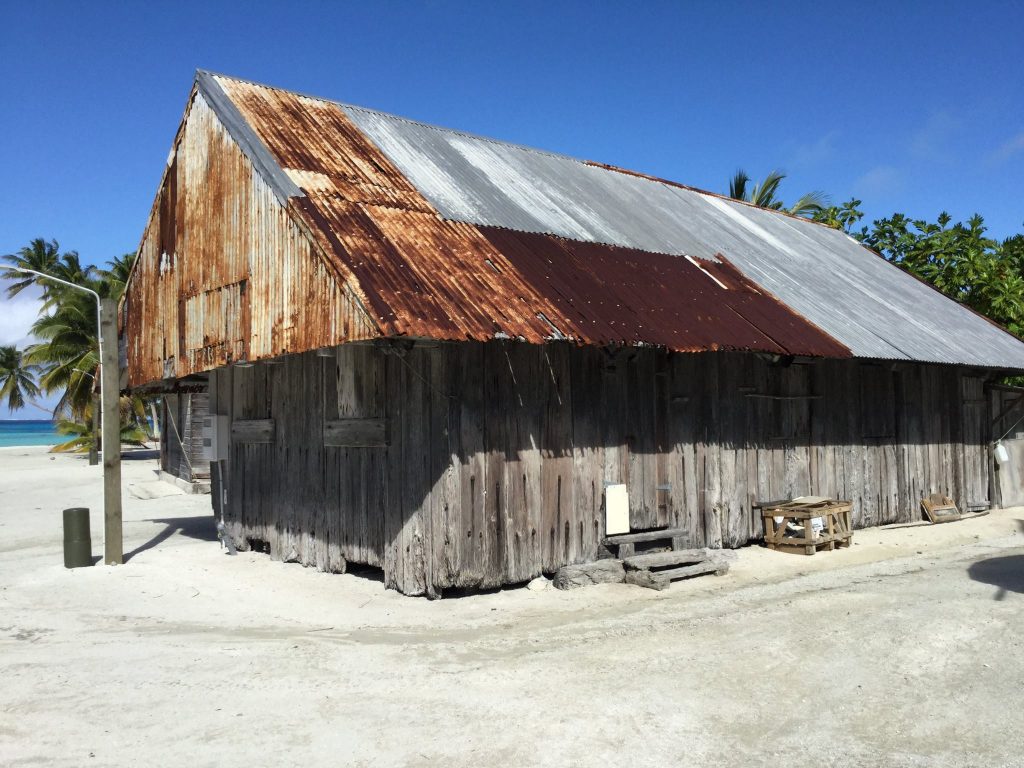 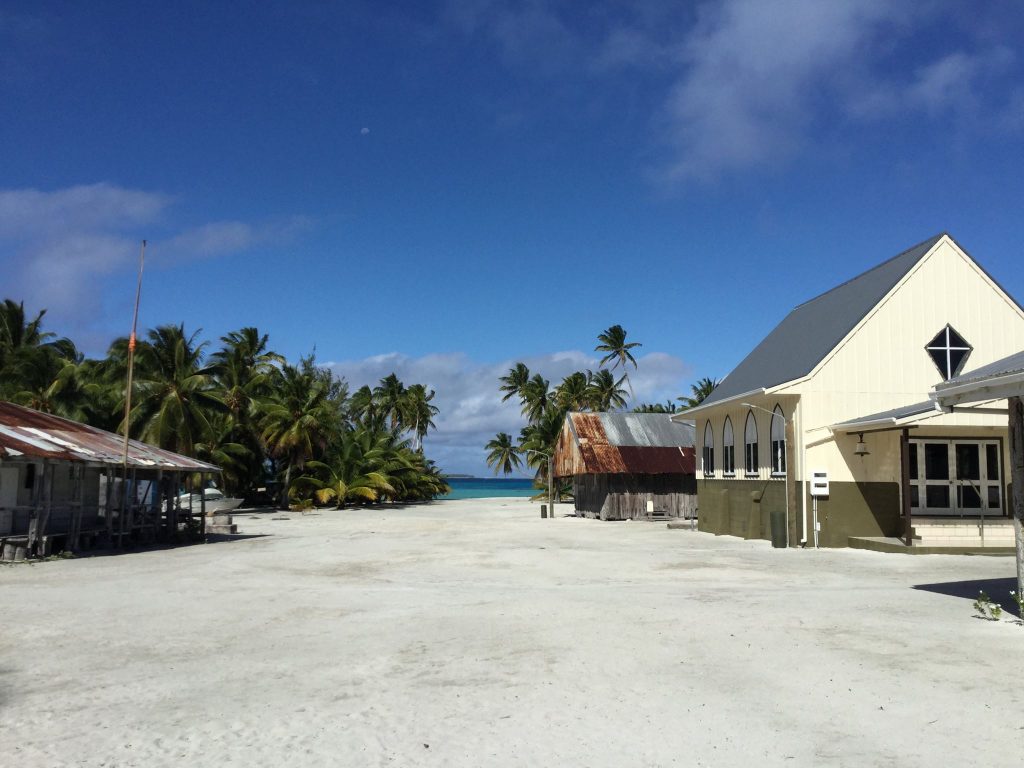 Their custom of offering us food, drinks and hospitality is very nice. But it does feel a little as if they have to do it. It is what had been decided, that’s how it’s always been and that’s what they do. I don’t know, but the rather forthright, jokey, loudly spoken English seemed a bit strange.

They are very kind and we are very grateful, but something felt as if something was missing. Maybe it’s just not the same Polynesian welcome that we have been used to…here it’s still very beautiful, the people are still very kind, but it’s very different.

We spent uncomfortable evenings tied up to the buoy outside the reef, it was just like being at sea really, Juju was sleeping with us and the boat was riding the waves. It was so frustrating as if we could only pass the reef all would be calm and still, but along with five other boats we spent the nights bobbing about.

Juju slept with us as we didn’t like to leave her in her cabin when it was bumpy and noisy, and she seemed to take up half the bed….such a wriggler!

So we decided to leave Palmerston and set sail towards Beverage Reef and then Niue. We stayed for just two days in Palmerston. It was a shorter stop than we had planned but with it being so rough on the buoy it wasn’t really comfortable to stay longer.

A quirky little stop, it was worth coming further north to come and see it for ourselves and we don’t regret our choice to come and visit. Who knows if we will be back this way again? 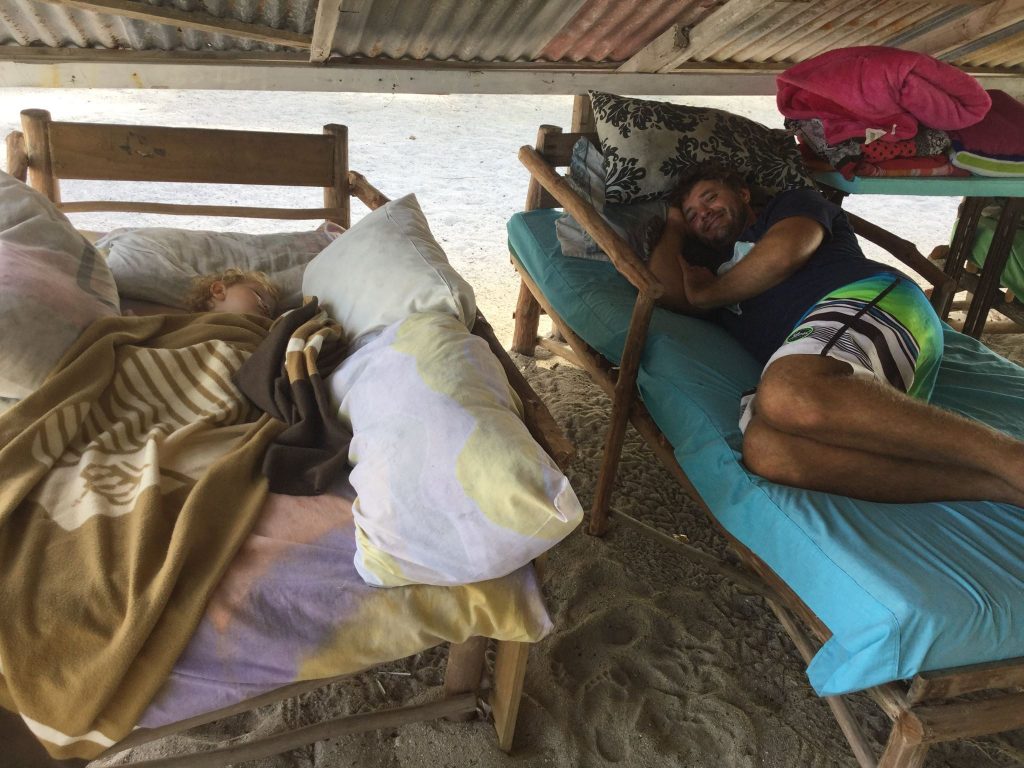